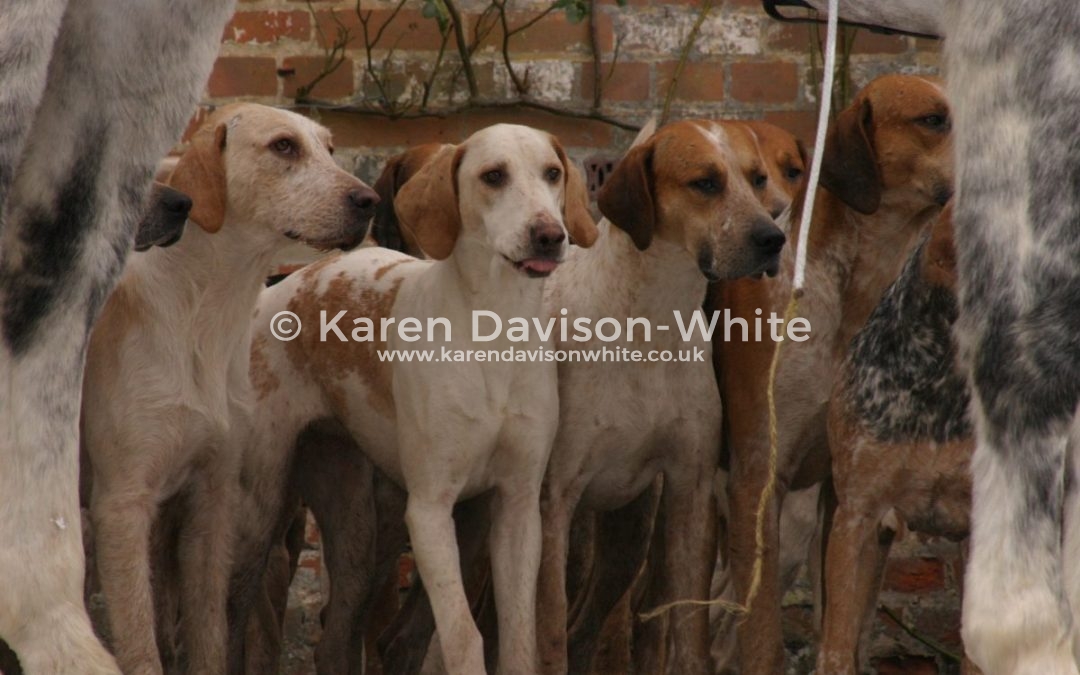 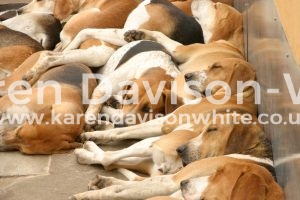 To the foxhunter there are few more beautiful or mellifluous sounds than the “singing” of hounds in kennel.  Daphne Moore wrote; being immensely fortunate in living close to the Badminton kennel, I hear them tuning in morning, noon and night.  It is in the night watches, when all else is silent, that the music is most impressive, The 8th Duke of Beaufort used to love to hear his hounds enjoying themselves as they lifted up their voices in a paean of glory.  This is what he wrote in the Hunting volume of the Badminton Library……………….

I am very fond of listening to hounds singing in kennel.  It is delightful to hear as it rises and falls, and seems as if each hounds has studied his notes, it is also a beautiful sight to see them sitting up with heads in the air enjoying their chorus.  At Badminton, ever since I can recollect it has been the practice not to interfere with them and to let them have their song out.  Charles Hamblin (the huntsman) has a theory that they are apt to fight, but that is all nonsense.  I never knew of a case of their fighting after singing.  They seem satisfied and quiet.  They sing much more in the summer time and when they are fresh than during the hunting season; still, they will do it all times, but more or less according to how fresh they are and with regard to the state of the weather. Fine weather induces them to sing.  I am sure it is much better for them to enjoy their music.

On the same theme Ikey Bell had a most interesting hypothesis, disclosed in his Huntsman’s Log-Book.  He says:

Mention of hounds “singing” in kennel (as they seem to do more often as cub-hunting is approaching) brings to my memory what I was told by a talented musician after he had listened a number of times to my hounds singing.  .  Not being at all musical myself I accept his remarks without comment.  To the reader who has never heard this lovely melody I had better explain that, though tuneful, it is rather an eerie sound.

It is always started by a single hound, and gradually more and more hounds “tune in” and in the same way it gradually subsides as odd ones drop out, until silence reigns in the night once more.  Later on (for there is no specified time for the entr-acte) another individual, not necessarily the hound who started the tune on the last occasion, and probably one with a different pitch of tone, will set them all off again.

My musical friend explained to me that what attracted him so much was that the singing is always in harmony like it is in an orchestra, and tuned to the note of the hound which began it.  For instance, should the music be started by a high-noted bitch on A (which is the more usual note), the deepest-voices dog hounds will take it up on A on a lower octave, while others will take it in “thirds” and “sixths,” and so it continues to swell and grow in perfect orchestral harmony, and there is never a discordant note heard………………..

It is, I think of interest that there is a certain similarity between hounds singing and wolves howling.  A programme on BBC radio in the early 1970’s included some comments of a musician concerning the united howling of wolves – an uncanny sound, even more so that the eerie music of foxhounds singing in the night.  He likened the sound to the horn music in Benjamin Britten’s Nocturne.  The initial note,

He stated, is in the key of F and the song starts pianissimo, rises to a crescendo, and gradually sinks to diminuendo.  After this one wolf (or possibly several wolves) begins on a different note form that which was originally employed and the song starts all over again.  The musician described the performance as a “magical sound” and referred to “Prima Donna stuff” in the diminuendo passages.  I have heard a recording of the wolf song and it bears a marked resemblance to the foxhound symphony.

That glorious medieval book compiled by Edward, Duke of York (first cousin to Henry IV) entitled The Master of Game, has this to say on wolves:  “They howl like hounds, and if there are but two they will make such a noise as if there were a route (that is the collective term for wolves) of seven or eight, if it is by night, when the weather is clear.”

Frederick Watson, a very well informed and amusing writer on all matters connected with venery, wrote entertainingly of hound song in a book published in 1932.

Hounds, like all real artists, sing on the smallest possible provocation, but they prefer the night before a hunt because they have not dined, and feel – quite naturally – extremely aesthetic, Hound singing has been resolutely ignored by musical authorities.  Even the bagpipes have their own literature; and there are, one may presume, handbooks on the triangle.  But although serious minded representatives of the BBC have lain in English dew to connect up Bridge parties all over the place with the hesitant and rather niggardly transports of the nightingale, the solid sustained and purely Slavonic symphony of foxhounds has been deliberately ignored.

If the night is clear, and so painfully still that strangers in The Pig and Turnip can listen without opening the bedroom windows, well-bred hounds feel it is a religious duty to acquaint all subscribers, members, farmers, villagers, foxes and vagrants, within a radius of three miles, that there will be a bit of sport in the morning…..

As the clock struck 1 am. And everybody was nicely asleep all along the Little Muchley valley, little            WISTFUL. (Who being harrier-bred, was a promising soprano) rose dutifully on the sleeping-bench, and with a preliminary tuning-note or two, quavered an opening bar.  It rose and melted away.  Her brother, WAYFARER, blinking with ignoble slumber, threw in his throaty alto.  Two mournful voices rose with anguished but limited cadence, HUBERT, the disillusioned kennel tom-cat, twitched his abandoned whiskers as he crouched by the boiler-house door, but what were two harriers in the empty moonlight?  RAVISHER and COMELY, CRINOLINE

AND TRESPASS – a little late, but in excellent voice.  Then COSY, WARRIOR, TAPSTER AND VANITY, BOUNCER, RANGER, DAMSEL and HORNET.  The mournful chant went up, quavered, wavered, and as those fine basses WARLOCK, SAMSON, HARPER       and LAWLESS came in, the chord fell an octave, the harmonies blended, the full chorus grew and sounded, melted a little and was sustained.  But here was not finality.  That came with old CONQUEROR, whose hollow note, like a sonorous dinner-gong, effulgent and deafening, gave a sense of high tide before the ebb.  There were Welsh in the pack …and where there are Welsh the range of voice is operatic.

The moonlight shed its pale radiance on the ecstatic faces, the shuttered eyes, forlorn muzzles and quivering throats.  The whole kennel was in it now.  Twenty couple altogether.  The night had been soundless, and, with ever extending consternation, the valley was more and more aware that, according to their old law and heritage, hounds were singing………….

Daphne wrote: I have once, and only once, heard a pack of hounds singing in the open and it was a marvellous experience.  It was a January day on the North Cotswold Hills, whose deep snow-clad heights were dazzling beneath a brilliant turquoise sky.  The snow sparkled in the frosty air; we might save for the sight of a pack of hounds and the red coats of the Hunt staff, have been in Switzerland.  At the end of the day we stood on the white slopes above the village as the Master sounded the long drawn-out notes of “Home-home-home!”  Hounds came up from the sloping woodlands to join their companions, and, sitting there on the hillside, they suddenly began to sing.  The sun was warm on their backs; they were fit and happy and content, and one by one, they raised their heads to the blue sky and gave melodious voice to their joy.  It was a glorious “curtain” to the day’s performance.