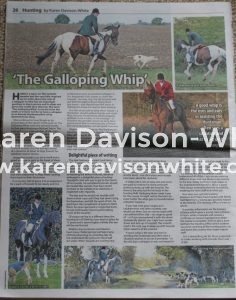 The very title inspired me to write about the role of a whipper-in who has an important position in hunt service and often not given the credit they deserve.

The mere quote “The Galloping Whip” is not far from the truth as it does not do to have a whipper-in or Kennel Huntsman/First Whip deemed to be slow.

Many referred to Tony Wright in his young days at the Quorn Foxhounds as “The Galloping Whip” when he turned hounds to that great Huntsman Michael Farrin.

The Whipper-in is a vital member of the team. He does quite often more work on his horse than the Huntsman. There is enormous pressure on him, not only to keep hounds up to their work, but in more built up areas to have eyes in the back of his head; to think outside the box and get ahead of a situation at times in order to stop hounds for whatever reason occurs.

Stopping hounds is an art in itself and a good whipper-in gets to the head of them. It is no good cracking a whip and charging up behind a pack of hounds that have gone; you will only drive them on. You must be swift across country and get to their heads and then endeavour to stop them. Turning them back to their Huntsman.

In a country where it is full of game it is so important for a pack of hounds to be steady. In such a country it is preferred to have an excellent whipper-in. It is frequently in his power to assist the hounds – he may stop the tail hounds and get them forward without doing them any hurt – and should have the sense to distinguish where he may be best wanted.

It is the whips job to keep them steady – a Huntsman should seldom rate, and never flog a hound. Punishment, when properly applied, is not cruelty, is not revenge – it is justice. Punishment that is unnecessarily inflicted – no possible good can arise. Evil communications corrupt good manners.

There are old writings on the Huntsman’s handling of hounds. That specifically explains their efficiency in their position. Of course Beckford comes to mind. Peter Beckford wrote “Thoughts on Hunting” first published in 1781 – a standard work on the subject. As Jorrocks said ‘This book is the werry best book wot ever was written.’

The late Henry Bentinck on Foxhounds wrote ‘Goodall’s Practice’. William Goodall for seventeen years was Huntsman to the Duke of Rutland – he died on the 1st May 1859.

Lord Henry Bentinck remarked on the late William Goodall’s method of handling the Belvoir Hounds. It is a delightful piece of old writing.

“Goodall’s Chief aim was to get to the hearts of his hounds. He considered hounds should be treated like women, that they would not bear to be bullied, to be deceived, or neglected with impunity. For this end he would not meddle with them in their casts until they had done trying for themselves, and felt the want of him, he paid them the compliment of going to fetch them, he never deceived or neglected them, he was continually cheering and making much of the hounds.”

Of course we live in a different time; the hunting act of 2004, post ban of fifteen years – it seems highly unlikely an unjust law will be overturned. Modern day Huntsman and Masters have many challenges.

Perhaps for those looking on – on a hunting day, many do not understand the pressures that the hunt staff is under.

Certainly when hounds are running near villages, towns and extremely busy roads, motorways, railways and the ever increasing white vans driving at speed delivering all sundry of goods that the modern day shopper has ordered from the internet. Never expecting to encounter a pack of hounds on the road round the next double bend – the horses and hounds have been about for centuries long before them!

A whips job is not an easy one and some are quick to criticise his sharp and swift actions in order to keep with hounds. The horse is the only tool for his trade in the hunting field. Galloping down roads is par for the course. It might not be the norm to most; better the Whip gets to hounds before a disaster happens. If you had wide grass verges as in Leicestershire and other counties, one would use them, but narrow roads, cars parked either side – no verge to speak of – or if you encountered it with the drains strategically placed you might likely turn upside down and end up in hospital. The smooth road is the only way to keep up with hounds when urgency requires.

A good whip is the eyes and ears in assisting the Huntsman and often sees a situation and has to act on it promptly – in the old days a whipper-in was not meant to be spoken to – or be expected to speak to the field. They have an important job to do and should be respected for getting on and doing it. “Morning Sir or Madam” is all that is required. Of course the old traditional Masters understand all of this – but we are entering different times and new Masters are coming to the fore.

Today hunting is high stakes in the entertainment business. Many a good Field Master entertains the field beautifully; enabling the hunt staff to do their job.

How does one get into hunting employment? Many have hunted with family members from a young age; possibly helped at the kennels.

The Hunting Office is there to advise. They would provide information on the Bursary Scheme which gives a young man a chance to learn whilst in kennels and receive a certificate on Hound management when the course in complete. There is a hunt list also from the Hunting Office – which outlines vacancies covering all the hunting packs up and down the country that might require staff.

A rewarding job for those prepared to make working hounds their way of life.