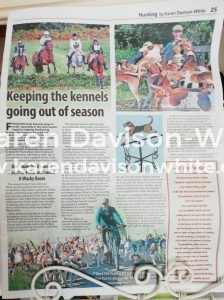 Financing Hunt kennels, large or small, especially in the close season, requires ongoing fundraising to keep the show on the road and guarantee monies are still coming in for the upkeep of the kennels, staff wages and particularly the hounds.

Some smaller Hunts find that their supporters’ club and social committee are an integral part of providing the monies to keep the Hunt afloat.  Most Foxhound packs in the year will hold an open day at the kennels or have a specific terrier show which can attract entries from further afield.  The annual hunter trial and horse show can be a yearly event and if you incorporate a dog show, it gives the whole family something to do while at the same time providing income for the Hunt.  The Supporters’ Club might have a merchandise stand and most Hunts today have an array of clothing with their logo on.  One Hunt held a mock Point-to-Point and called it Wacky Races.

These events require plenty of volunteers to organise which often draws on the same people all the time but they are crucial to the Hunt and are worth their weight in gold.  A Hunt ball is usually held in the hunting season, incorporating an auction, and some Hunts do summer parties.  The Dunston Harriers hold a hugely successful hare raisers ball in late spring.  It is not unknown for the guests to pitch up in their horseboxes at the venue as the party goes on until the early hours.  Should they require to ‘go to perch’ before the dawn chorus, they can have a snooze in their lorries.  That expression ‘going to perch’ amused me and came from an old Suffolk boy a hunting stalwart friend of mine, a great foot follower of the Essex and Suffolk Foxhounds who has forgotten more about hunting than some people would know.  You would not get John Minns out at such a late hour because he would have ‘gone to perch’ at 9pm prompt!

Hound sponsorship brings some pounds in and it can be fun to watch your hound in the hunting season and see your hound on any visit to the kennels you might make.  Hound exercise can be quite popular on foot in the early part of the summer when hounds are having a stretch of leg and not doing a great distance.  Then once the Hunt staff are on bicycles, it is often fun to encourage adults and children for a morning’s hound exercise and provide a breakfast afterwards at a small charge.  It is usually a very gratifying morning and adds coffers to the Hunt.

Pleasure rides are becoming increasingly popular and can be quite lucrative and bring in a few thousand pounds on the day.  The Holcombe Harriers arrange clinics, providing those riders that are keen on instruction the chance to access a top notch trainer for the day, another way of thinking outside the box and bringing in some expertise from other disciplines.

A summer evening hound racing at the kennels is all-round fun.  A cordoned off run down the side of the field or grass yard with some bales as hurdles for hounds to jump provides the perfect course with coloured collars on the hounds so you can pick your running hound and have a tote and a barbecue – it makes for great entertainment and can pull in the punters.  It reminds me of the flapping track days in the North East with the Whippets.

As the farmers have to diversify, so it is that Hunts are nowadays always trying to think of new or innovative ways of fundraising to keep the precious hounds and working staff in their positions.  It also keeps people together and without the support and money coming in you would not have a hunt.

Farmers play such an important part as without their permission to hunt on their land there would definitely be no hunting.  Some Hunts have a farmers’ lunch (non profit making) for obvious reasons and to thank them for all their generosity.

Will H. Ogilvie wrote a wonderful poem To The Farmers which sums it up beautifully.